A recent article in the Globe and Mail has shone a light on some very unsavoury and unsafe practices that are occurring in our country when it in comes to the Temporary Foreign Workers Program. (October 5th, “How an immigration scheme steers newcomers into Canadian trucking jobs and puts lives at risk”) https://www.theglobeandmail.com/canada/article-foreign-truck-drivers-canada-immigration-investigation/

While many in the industry were aware of these issues and have been sounding alarm bells about the TFWP leading to abuse of workers, underpay, and unsafe business practices, the scale of the issue uncovered by the Globe was nevertheless alarming. The article highlighted many cases where TFW’s were steered into the Trucking Industry as a way to help them qualify for permanent residency. While the industry does need drivers, and when jobs can’t be filled with Canadian workers, Temporary Foreign workers, on a path to become permanent residents to help solve our long term shortage, is a program we support, the way it is being done by to many firms is appalling, and must be stopped. We have cases the Globe discovered, where so called “Immigration consultants”, are charging potential drivers anywhere from $5 to $55k to gain access to a trucking job. In many cases, these fees are split between the company and consultant. Many of these drivers are being steered towards jurisdictions that do not have Mandatory Entry Level Training, as this way drivers can get licensed and on the road faster. B.C. appears to be the jurisdiction where this practice is most rampant, with 43 percent of the authorizations delved out by the feds (ESDC) from 2016 to 2018 being from that Province. The investigation revealed that nearly one third of the companies who received authorizations had significant safety problems or were marginal operators, yet these 29 companies were approved to hire 291 foreign workers…3 of the companies did not even have a safety fitness certificate, which is a minimum requirement to operate a CMV. One of the carriers was found to have underpaid employees in 2016, and was ordered to pay 37 workers $121,517.00, yet were still approved to hire 20 TFW after this occurred. How can this be allowed to occur in a developed and progressive country like Canada? That is the crux of our problem. The issue, like many of the issues that occur with regulations in this country, is disjointed communication between the Feds, the Provinces and Territories, and different government departments. If you want to hire a TFW, companies must apply to the federal government, who will then approve or deny the authorisation to hire a TFW. The Feds mainly will look into whether you have tried to fill these positions with local workers first, before providing authorisations to hire. The Provinces and Territories look after Carrier Safety Fitness Ratings, and the Feds, who approve the authorisations to hire, do not even look into this. The investigation from the Globe clearly shows that they do not even appear to look into past employment practices, as is obvious in the case of underpaying employees, yet still being approved to hire a story like this, is yet another stain on the image of our Industry, and one that is going to make it even harder to try and recruit new people into our industry. The issue, as always, is that a small percentage of industry are the ones that are abusing this practice, with the vast majority using the TFWP as a way to fill vacant jobs, while treating them fairly, paying them well, providing proper training and integrating the new worker, and his or her families, into their companies and communities. The small percentage are driving wages down, putting a stain on the image of our industry, abusing workers, and worse yet putting unsafe and dangerous drivers out on our roadways.

While the industry, and the public should be outraged, we need to ensure we do not throw the baby out with the bathwater. This country was built on immigrants, and if we want to continue to expand our industry, we will continue to need to access immigrants. If we really want to tackle the issue at hand, as an industry we need to express our outrage to the Feds and the Provinces, and we must be willing to work with governments to encourage them to raise the barrier to entry into our industry. We must have a National Standard that governs Carrier Safety Ratings, not individual standards from each Province. We must have increased communication from each jurisdiction and the Feds, and we must increase the standards that are applied that allows authorisations for TFW’s to be dolled out. Only carriers who have proven safety records should be allowed access to TFW’s. These carriers should also have documented safety and training programs in place, as well as a program to help transition these drivers, and their families into their companies and communities. To allow anything less is not only to fail our industry, it is to fail the new immigrants coming to our country, and the safety of all of us who operate on the roadways. If the regulators do not act quickly to solve this exposed issue, it would appear we have learned very little from the Humboldt Bronco’s tragedy. We should all expect better! 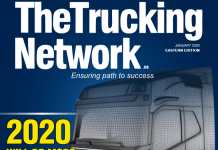 Latest Scams & Security Threats to Be Aware Of

Latest Scams & Security Threats to Be Aware Of

Is the playing field level for women at the loading dock?